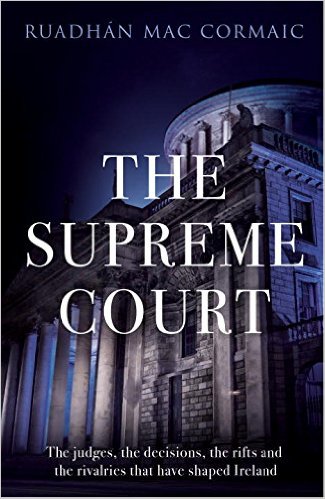 Ruadhán Mac Cormaic’s book reads with such ease that you tend to forget that you’re reading an extensively researched chronicle of the cases that have shaped Ireland. Each chapter serves to educate and entertain the reader with insightful accounts of the social and political influences surrounding each case, and indeed each judicial appointment to the Court.

The social and political narratives of raging conflicts, ripples of which are still felt, are told in an entirely unique way that is sure to captivate anyone drawn to Mac Cormaic’s first book. As a legal scholar, I was drawn to this publication for obvious reasons, but I would personally recommend it anyone interested in Irish history, politics, or the social sciences as an essential read – it should also go without saying that those with an interest in law need to put this on their reading list as the most digestible legal textbook known to mankind!

Amidst the movement to repeal the eighth amendment that has seen the pro-choice versus pro-life debate reignited, through chapters on access to contraception in McGee v The Attorney General, and on the “internment” of a 14-year-old rape victim seeking to travel to England for an abortion in X; Mac Cormaic offers the untold stories of monumental challenges to the conservatism that has plagued women’s rights in Ireland, also highlighting the hypocrisy with which the eighth amendment to the Constitution was brought about.

While the constitutional declaration commits the judiciary to decide cases “without fear or favour, affection or ill-will towards any man”, there is an inherently subjective nature to a judge’s task that is highlighted in Mac Cormaic’s chapter on the Whelehan affair and the impact of this that continued throughout the years.

Reflecting upon this, for me, the most poignant quote shared by Mac Cormaic is one from newly appointed Supreme Court judge Niall McCarthy in 1982:

“Last week they were my opinions. Now they’re the law”

One can only hope that the future opinions of those entrusted in the Supreme Court pave the way for a more progressive Ireland.