Weekend Books – Les Parisiennes: How the Women of Paris Lived, Loved and Died in the 1940s 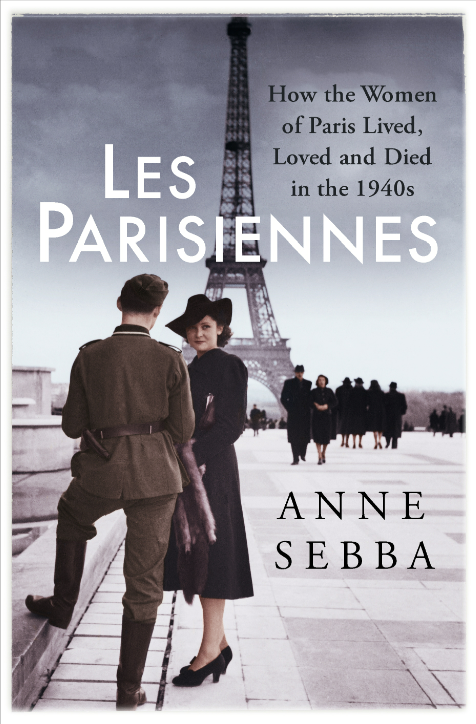 Our ideas of Paris during the war may well have been shaped from the film Casablanca. “Well, Rick, we’ll always have Paris…” Ilsa (Ingrid Bergman) says. But I would doubt few, if any of us, would have paused to consider what Paris actually meant for those living there in the period of the Second World War. Those living there meant the women (because the men were absent, fighting or prisoners). This unique well-researched book comprises a collection of accounts by and about women who were left in an occupied country to face the enemy on an everyday basis. The enemy was not a stereotype – as many Germans were described as courteous, educated and cultured, enjoying the sophistication of Paris.

Stories are included from a range of women, from shopkeepers to prostitutes, from collaborators to those quite simply trying to get on with their everyday lives. Domestic roles needed to continue, looking after their children and cooking with reduced rations when facing temptation from the black market or the Germans in obtaining food for the table. Women continued to work in traditional jobs but took on new roles, such as fighting in the resistance and experiencing hostility, danger and death. Socialising continued, where risks and restrictions affected where and what women could do.

Anne Sebba’s book presents a number of highly detailed descriptive and fascinating accounts of such women living in Paris in chapters vividly headed “1939: Paris on the Edge” to “1948-49 Paris Americanised”. The Parisiennes caught up during the War included native-born, those British by birth married to Frenchmen, Americans and Nazi women stationed with their husbands.

A strength of this book is that it does not presuppose or require any background knowledge on the part of the reader. The author fills in the details in discussing the 1942 complicity of the French population in the raids on the Jews culminating in the round-ups at the Vél d’Hiver, the British (and novel) practice of sending in female SOE resistance agents and the Nuremberg war trials (for the legal purists where the book does contain legal content about the evidence in court).

Sebba’s easy narrative style means this book should have a broad appeal to anyone interested in history. It is in no way a feminist book. It focuses on women as a group and the choices they take and make. Its appeal is wider, causing us all to ponder and reflect what we would have done or how we might have behaved when our country was occupied.

The answer is not clear-cut as Sebba recognises as ‘c’est compliqué’ even when judged by our knowledge and understanding today. Sebba states that she wants “to avoid black and white, good and evil, but instead to reveal constant moral ambiguity”.

Life of course continued. it was not the same. Though many did not actively resist, by not engaging with the Germans or informing on those hiding, passive resistance was wider than perhaps we might imagine. Others openly engaged in providing entertainment, such as Edith Piaf, who took care to surround herself when performing in Germany with pictures of French prisoners, perhaps recognising that there was a time of reckoning coming where she might require to establish her credentials post-war.

Post-war, like the British women after WW1, France rewarded its daughters with the vote. But the role of women was not a topic ever considered until now, with this book. Those women returning faced contrasting reactions. Those from the camps were victims while those that had resisted were heroines decorated by a grateful state. Those that remained at home were not recognised while France celebrated its “two and a half million sons” returning.

“War destroys lives.” The importance of this book is in raising our awareness while promoting an understanding faced by the role of women in difficult and challenging times. Interestingly, fashion remained important to the chic Parisiennes who adapted to the clothing restrictions by turning out with tricolorebuttons or adapting clothing to ride bicycles.

One will remember the tale of one woman using her meagre butter ration as a hand cream at the expense of her eating it. As the author indicates, appearance was a major concern, perhaps it might only apply with a Parisienne. But that can be a matter for debate/conjecture.