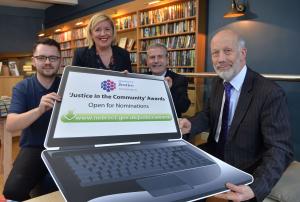 Northern Ireland’s Justice Minister David Ford has met with the judges of the 2016 Justice in the Community Awards ahead of the close of nominations next month.

Mr Ford has encouraged members of the public to submit nominations for the awards, which are now in their fifth year, by 1 February 2016.

The awards provide an opportunity to acknowledge those within the voluntary and statutory sectors who have made a significant contribution to making their communities safer and better for everyone.

Mr Ford said: “There are many inspirational people in our society, from both statutory and voluntary backgrounds, who work tirelessly, to make our community a safer place.

“Much of this work is done quietly and without expectation of recognition. The Justice in the Community Awards provides us with an opportunity to recognise this valuable work.

“I met this week with Brendan McGuigan, Una McKernan and Jim Smith who will judge the nominations. I know from experience that a vast amount of excellent work is being done in communities throughout Northern Ireland so they will no doubt have a very tough job selecting the overall winners.

“I encourage anyone who is aware of an individual or group whose work has made a real difference to their community, to acknowledge that contribution by nominating them for a Justice in the Community Award. I look forward to meeting all the nominees and presenting the Awards at the ceremony in March.”

A top award of £1,000 will made to the overall winning team or individual to invest in their project.

Highly Commended awards will also be made at the discretion of the independent judging panel.