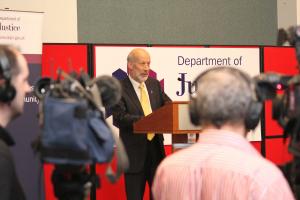 Northern Ireland’s Justice Minister David Ford has launched a public consultation on the creation of a new offence of domestic abuse.

The specific offence would relate to patterns of coercive and controlling behaviour in intimate relationships.

The consultation is part of a range of initiatives to tackle domestic violence and abuse in Northern Ireland and also asks for views on the establishment of a Domestic Violence Disclosure Scheme.

Mr Ford said: “It is now widely recognised that domestic abuse is not just about violence. Coercive and controlling behaviour can be more difficult to identify but can have an equally devastating impact on victims.

“In recognising this, the draft Stopping Domestic Violence and Abuse Strategy includes a revised definition of domestic abuse to capture coercive and controlling behaviour.

“This consultation seeks views on whether the law needs to be strengthened to keep pace with these developments and create a specific offence to capture these patterns of behaviour in intimate relationships.”

He added: “I also recognise that whilst we protect victims, we must work to prevent these incidents happening in the first place.

“Therefore this consultation is also seeking views on whether current arrangements can be enhanced by the establishment of a Domestic Violence Disclosure Scheme in Northern Ireland.

“Such a scheme, would be based on processes that would enable new partners of previously violent individuals to find out about their partner’s history of violence and abuse.

“They could then make informed choices about how and whether they take that relationship forward.”

The consultation will last for a period of 12 weeks and closes on 29 April 2016.