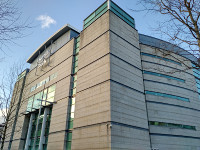 A Northern Ireland Crown Court sitting in Belfast has determined that James McVeigh will go 18 years without the possibility of parole after pleading guilty to the 2019 murder of Paul Smyth.

The court’s decision was impacted by aggravating factors, such as the fact that McVeigh was out on bail at the time of the killing, and the victim impact statements which were received from the deceased’s family.

In June 2019, McVeigh was told that money and drugs could be obtained at the deceased’s home in Lisburn. The person who shared this information did not contemplate that McVeigh would kill or physically harm the deceased, but the identification of his home as a potential source of drugs and money ultimately led to his death.

They drove together to Coulson Avenue, and Paul Smyth’s house was pointed out to McVeigh. CCTV footage later showed McVeigh in the area during the early hours of 19 June.

He entered Tesco at 02:02 and could be seen wearing a distinctive grey tracksuit he was observed wearing the previous day at Coulson Avenue. He was also wearing a Northern Ireland football scarf. When he was later seen on camera at 03:49, he had changed his clothes.

He was later observed in Rushmere Shopping Centre, Craigavon, at JD Sports, where McVeigh was purchasing a number of items with bundles of cash. It was the prosecution case that these purchases were funded by money taken from the home of Paul Smyth earlier that day.

Police went to McVeigh’s home that afternoon, on an unrelated matter, and a police video showed a grey tracksuit and a Northern Ireland football scarf drying on a clothes horse in McVeigh’s living room.

The scarf was subsequently seized and forensically examined. Cartridge discharge residue was located on the scarf which was noted to be similar in composition to the residue found on items retrieved from 7 Coulson Avenue.

Paul Smyth was 50 years old at the time of his death. He lived alone at Coulson Avenue, where he appeared to sell drugs on a small scale.

Hours after the attack in his home, ambulance personnel arrived at the scene. They noticed that the deceased had suffered a traumatic injury to the chest and that the significant result in blood loss was incompatible with life.

A subsequent autopsy established the cause of death was due to a “shotgun wound to the chest” fired at no more than a few feet away.

The prosecution case was that the defendant, McVeigh, entered the home of the deceased during the early hours of 19 June 2019 and shot him at close range with a firearm which he had obtained beforehand. He also took a quantity of cash from the deceased before fleeing the scene.

Having pleaded guilty, the court imposed a sentence of life imprisonment. It was now the task of the court to determine the length of the minimum term the defendant is required to serve in prison before he will first become eligible to have his case referred for parole.

To begin, the court considered the victim impact statements that were received from some relatives of the deceased. These statements spoke “movingly about how his death has had an enduring and debilitating effect on them and the wider family”.

Next, the court considered the defendant himself. McVeigh was 32 years old, and had 62 previous convictions, which included burglary, aggravated assault, and causing grievous bodily harm. The latter arose out of an attack on a neighbouring couple with a hammer and Stanley knife after they had called to complain about noise.

The court also considered the fact that the murder of Paul Smyth occurred while McVeigh was out on bail. Further, the Probation Board considered McVeigh to have a high risk of reoffending and was someone presenting a significant risk of serious harm.

Given the foregoing, the court considered what tariff would be appropriate to “satisfy the requirements of retribution and deterrence”. Here, the starting point was 16 years.

Culpability was crucial in the court’s assessment of the case. They noted that in his interview with the Probation Service, he alleged that the gun was fired when the deceased approached him from behind and sought to grab the weapon.

A further aggravating feature was the fact that this murder was committed whilst the defendant was on police bail for serious offences.

However, there were some mitigating factors, such as a medical report about McVeigh’s mental state, and the fact that he did plead guilty.

Ultimately, the court came to the conclusion that the appropriate tariff was 22 years’ imprisonment, to reflect the gravity of the offence and the significant aggravating features.

Looking at all the circumstances in which the plea was entered, the court reduced the final tariff to one of 18 years, representing a discount of approximately one sixth for his guilty plea.