In Northern Ireland there has been a notable increase of the number of females working in the law with a 42% rise observed over the last decade. In 2005 there were a total of 2194 practising solicitors and of those 919 were females. Of today’s total of 2693 practising solicitors, there are currently some 1,310 female solicitors.

The rise in female lawyers is welcome. I believe that women have natural leadership styles and can offer creativeand innovative solutions. There is no doubt in my mind that the characteristics of men and women complement each other in the work environment.

I was particularly delighted with the recent High Court Bench appointments of the Hon. Madam Justice McBride and the Hon. Mrs Justice Keegan.

Positive role models matter to female lawyers. There are still hurdles for women to overcome, whether they have children or not. As such more females in senior positions is crucial to ensure that any perceived or real gender gap is bridged, but also to ensure that the environment in which all lawyers work is modern and has a culture of equality. A few years ago, Lady Justice Hallett, a senior judge in England, warned of an ‘unconscious bias’ against women in the legal profession.

Imelda McMillan, a Senior Director in a local law firm, initiated Northern Ireland’s Women in Law Programme in 2013. I was lucky enough to be invited to the programme and since then I have been honoured to act as a mentor to other female solicitors working in Northern Ireland. This programme has received massive support from The Law Society of Northern Ireland in conjunction with the Bar Council.

I am honoured and humbled to have been elected Chair of the Belfast Solicitors’ Association 2016, and I believe I am the fifth female to be elected since its formation. The BSA was formed in 1943 and at that time it sought to represent solicitors practising in the City and Greater Belfast area. Today the BSA represents over 700 solicitors. The BSA has been an important part of my career to date. In my role as Chair I hope to promote and celebrate the BSA’s work and achievements, and I am particularly hopeful that I might inspire other female practitioners to consider the role in the future. 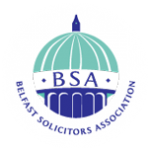