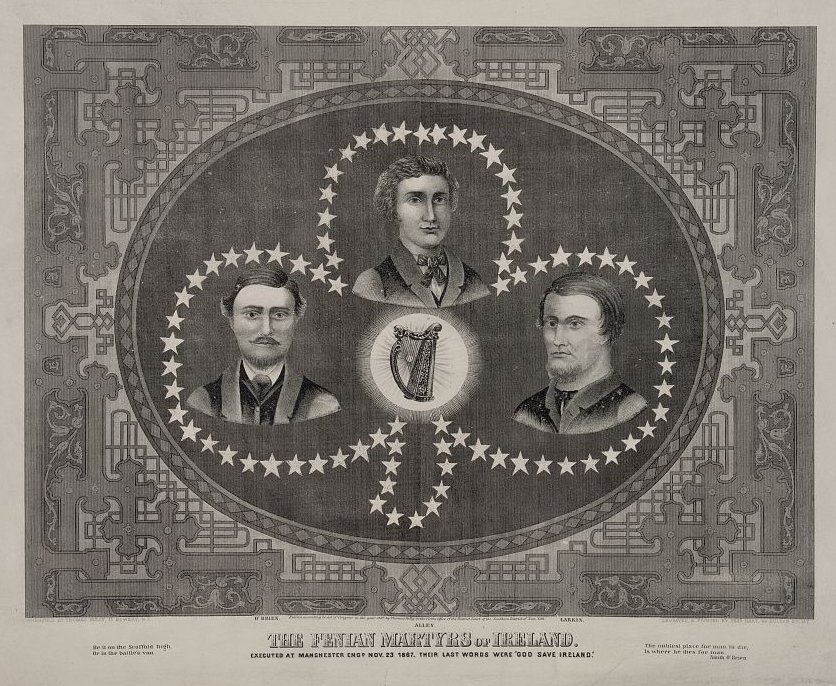 Thomas Kelly and Timothy Deasy had been arrested when police observed them “loitering about the streets in a suspicious manner” in the middle of the night, and presumed they were plotting a robbery. They were found to have loaded revolvers in their pockets, and were charged under the Vagrancy Act. However, communications with the Irish police led them to be identified as “notorious Fenians” who were key members of the IRB (M McDonnell Bodkin, Famous Irish Trials (1918)).

Kelly and Deasy evaded capture, but the investigation led to the arrest of 26 men. The first five men to be put on trial were William Philip Allen, Michael Larkin, Michael O’Brien, Edward O’Meagher Condon (otherwise known as Edward Shore), and Thomas Maguire (M McDonnell Bodkin, Famous Irish Trials (1918)). The jury found all five of the accused to be guilty of murder. The men were sentenced to death by hanging, to which they cried from the dock “God save Ireland!”.

Edward O’Meagher Condon and Thomas Maguire were ultimately saved from the death penalty. The Home Secretary recommended that Thomas Maguire should be pardoned after it was accepted that he was not present at the rescue and that the witness testimony, upon which he and the other accused were convicted, was false. The Crown also granted reprieve to Edward O’Meagher Condon, as “he was unarmed when apprehended and was not proved to be armed during the fatal affray”.

On 23 November 1867, William Allen, Michael O’Brien, and Michael Larkin were publicly executed in Manchester to a jeering crowd of thousands of people.

It was widely believed that none of the men had fired the fatal shot, and that a miscarriage of justice had occurred. Their cries of “God save Ireland” were ever memorialised in a song written by Timothy Daniel Sullivan that served as an unofficial Irish national anthem for years after their deaths: