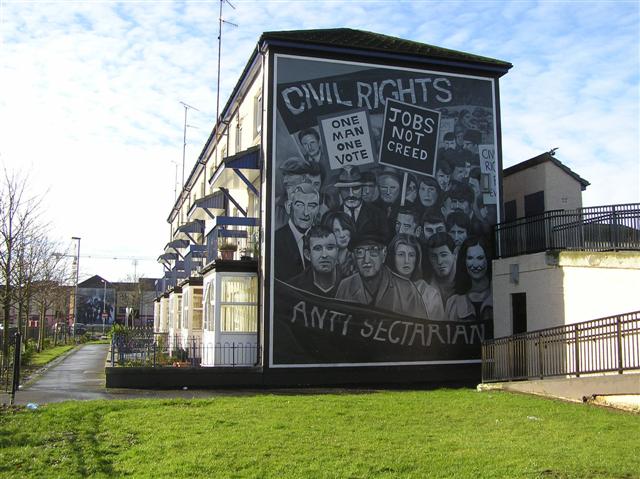 The Northern Ireland Civil Rights Association (NICRA) was established in 1967, and one of its main goals was to achieve ‘one man, one vote’ in Northern Ireland. The plural voting system, which gave business owners and university degree holders an extra vote, had been abolished in the rest of the UK by the Representation of the People Act 1948, but this did not extend to local council elections in Northern Ireland.

Voting inequities continued in Northern Ireland until the late 1960s, where only ratepayers and their spouses had a vote in local council elections. This meant that the poorest in society, who did not own the property they were living in, did not have the right to vote - and private landlords who were technically the ratepayers for multiple properties had multiple votes (even though the rent paid by their tenants would have covered the rates). While tenants in council houses had the right to vote by virtue of being ratepayers, the allocation of council houses at this time was covertly discriminatory.

In 1969, the Cameron Commission reported that councils “withheld planning permission, or caused needless delays, where they believed a housing project would be to their electoral disadvantage”, and the principal criterion for allocation was “not actual need but maintenance of the current political preponderance in the local government area” - i.e. to maintain a unionist majority vote. Indeed, Whyte describes a conversation between a Housing Trust and the Mayor of Portadown, who complained that the Trust was putting too many Catholics into houses in Portadown - when asked how many Catholics were in council houses in Portadown, the mayor replied “one, and that’s one too bloody many”.

This discrimination compounded the inequities already present due to the continuance of the university vote and the business vote, and so the aim for “one man, one vote” was a multi-layered demand from NICRA. The Cameron Commission was established to hold an enquiry into the cause of “civil disturbance” on and since NICRA’s march on the 5th of October 1968. In its chapter on causes of the “disorders”, the report described the fact that Unionists were able to secure 12 out of the 20 seats in the Derry/Londonderry Borough when 62 per cent of the voting population was Catholic, as “an extraordinary situation”. Asking the Unionist public representatives to explain these electoral imbalances, the report stated that the arguments used to justify the imbalances ignored the realities of the local situation, that it was obvious that local politics “turned on questions of sectarian control and influence”, and that they “mainly rationalised a determination to achieve and maintain Unionist electoral control”.

A victory for the civil rights movement came in the form of the Electoral Law Act (Northern Ireland) 1968, which abolished the university vote and the business vote.