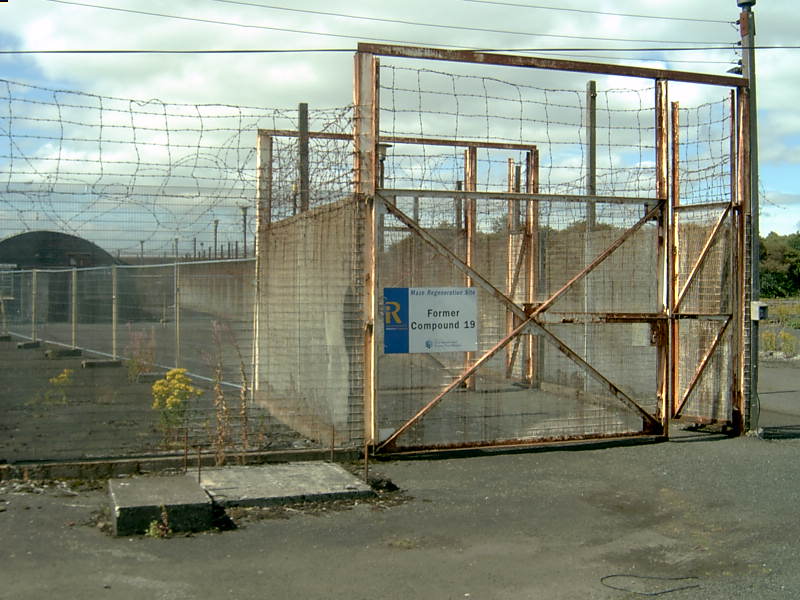 Pictured: Entrance to a former compound at Long Kesh, which was opened in 1971 to imprison those who had been interned during Operation Demetrius. Long Kesh, also referred to as the Maze prison, was finally closed in 2000 when prisoners were released as part of the peace process.

Between the 9th and 10th of August 1971, the British Army initiated ‘Operation Demetrius’ in Northern Ireland – which involved the arrest and internment of hundreds of people suspected of being associated with the IRA. Of those arrested and interned during Operation Demetrius, fourteen men were interrogated with the use of the ‘five techniques’ which had been authorised for ‘interrogation in depth’. The ‘five techniques’ were used by the Army and the RUC to torture the men, and the techniques, which were referred to as ‘disorientation’ or ‘sensory deprivation’, included:

In December 1971, the Irish Government made an interstate application to the European Commission of Human Rights, alleging, inter alia, ill-treatment and torture by the British security forces, contrary to Article 3 of the European Convention for the Protection of Human Rights and Fundamental Freedoms (the Government also made allegations of violations under Articles 1, 2, 3, 5, 6 and 14 of the Convention ).

In 1976, the Commission issued its report on the application. Amongst its findings, the Commission found unanimously that the combined use of the five techniques in the cases before it constituted a practice of inhuman treatment and of torture in breach of Article 3.

The case was then referred to the European Court of Human Rights, which disagreed with the Commission’s finding on Article 3, stating that ‘the techniques were applied in combination, with premeditation and for hours at a stretch; they caused, if not actual bodily injury, at least intense physical and mental suffering to the persons subjected thereto and also led to acute psychiatric disturbances during interrogation’.

As such, it was the Court’s view that the technique’s fell into the category of inhuman treatment, and that they were also degrading ‘since they were such as to arouse in their victims feelings of fear, anguish and inferiority capable of humiliating and debasing them and possibly breaking their physical or moral resistance’.

The ECtHR said that this was distinct from torture, due to the ‘difference in the intensity of the suffering inflicted’. Finding that the five technique’s ‘did not occasion suffering of the particular intensity and cruelty implied by the word torture as so understood’, the judgment has been widely criticised and used as a justification for torture techniques used by the USA. New information pertaining to the case was the subject of an RTÉ documentary in 2014 which prompted fresh appeals, and confirmed for many that the UK government had misled the ECtHR in 1978.

Although attempts to revise the 1978 judgment have been unsuccessful, the hooded men have brought proceedings in Northern Ireland to require the identification and prosecution of those involved in what was done to them in 1971.