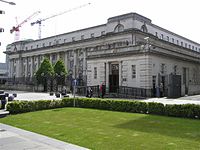 The UK government has applied for the use of a closed material procedure (CMP) in a court case before the High Court in Belfast.

It marks the first application for a partially-secret hearing in the Northern Ireland courts.

Under the Justice and Security Act 2013, the government can apply for some evidence to be heard by a judge and a special advocate barrister representing the plaintiff in a closed session.

The government is seeking approval from Mr Justice Paul Maguire for this to be allowed in judicial review proceedings brought against the Secretary of State, Theresa Villiers, over her refusal to order a public inquiry into the Omagh bombing in 1998.

Michael Gallagher, who brought forward the proceedings, has argued the government has not met its obligations under article 2 of the European Convention on Human Rights.