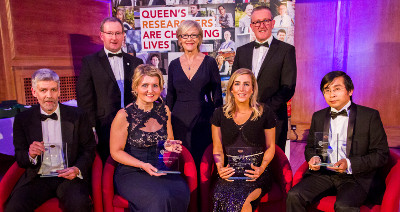 An academic in the School of Law at Queen’s University Belfast has been recognised for the positive impact of her work at the Vice-Chancellor’s Research Prizes 2016.

Dr Anna Bryson won the award in the post-doctoral research category at the annual Chief Executives’ Club Gala on Friday.

Since 2015, she has worked with colleagues at Ulster University, the Committee on the Administration of Justice, and a former senior FCO lawyer to develop a Model Bill for the ‘Dealing with the Past’ elements of the Stormont House Agreement. The mock legislation was launched in the House of Lords last October.

Speaking after receiving the award, Dr Bryson told Irish Legal News: “I am delighted to have received this prestigious research award.

“As a historian now working at the interface of socio-legal research and transitional justice an opportunity arose to apply my skills and expertise to analysis of the legacy mechanisms proposed under the terms of the Stormont House Agreement. I have taught and published widely on oral history and as such I focused my attention on the Oral History Archive.

“A number of challenges were clear from the outset. The Boston College Tapes affair continues to unfold, fuelling scepticism, cynicism and fear. There is also a concern amongst existing oral history groups that a new state-sponsored archive could threaten and diminish, rather than facilitate and safeguard, their work. I thus emphasised on the one hand the paramount importance of ethical and legal probity and on the other the need to find creative, flexible and imaginative modes of engagement.

“Given the fractured state of our post-conflict communities and the natural inclination of many victims and survivors to reserve judgement and ‘say nothing’, it is clearly essential that the governance of the Archive is deemed independent and entirely free from political influence and interference. Indeed this fundamental principle is enshrined in the Stormont House Agreement.

“Cast in the right mould, this Archive could make a real and meaningful contribution to the notoriously challenging work of reconciliation. The official model is the subject of ongoing political negotiations but the drafts that have emerged to date suggest that much work remains to be done to ensure that this invaluable opportunity is not squandered.”

Dr Bryson added: “This award has encouraged those of us involved in the ‘Model Bill’ drafting process to continue our efforts.

“In accepting it I am very mindful of the work of that wider team and indeed of the support and encouragement of colleagues at both the School of Law and the Senator George J. Mitchell Institute for Global Peace, Security and Justice.

“In particular I would like to pay tribute to the academic leadership of Professor Kieran McEvoy, who has led the way on much of the work on Dealing with the Past in Northern Ireland, not least by facilitating the work of a new generation of scholars.”