Blog: Legalese Bolognese on the Via Malcontenti

The waiter who plonked a carafe of cheap Sangiovese down on our table at the little restaurant off Bologna’s Via Malcontenti spoke flawless English.

A lightly-bearded thirty-something, he looked too old to be a student. “I graduated years ago with a law degree,” he volunteered. “And I gave up any hope of a career in law years ago. Unless you are well connected or from a rich family, it is impossible. I will never be a lawyer.”

There are, he said, many thousands of graduates like him in Italy and laughed wryly: “The Italian government has produced an army of well-educated waiters.”

Pietro is one of Italy’s vast army of milleuristi, workers who earn only 1,000 euros or less – often in the country’s huge black economy. It is also more than likely that he is a bambiccioni, or ‘big baby’, one of the majority of Italians aged 25-34 who still reside with their parents for economic reasons. Their disinclination to have children has led to a population growth rate of zero which the Italian health minister has warned will have ‘apocalyptic’ consequences for Italian society.

Bologna’s venerable law school is the oldest in the world – in the Middle Ages wannabe lawyers from Ireland and Scotland walked to the city to learn the foundations of their profession in the institution which was developing the canon of Roman law. 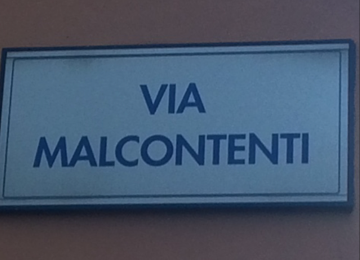 The Italians are still coming in droves to the university – despite their uncertain future. The graffiti on the grimey walls of the square favoured by students announces we are in the ‘autonomous’ university – which, along with a light smattering of posters depicting Fidel Castro and the dashing Camillo Cienfuegos, is one of the very few indications of student radicalism.

None of the students in their drab uniforms of denim and grey grunge are sporting stickers or badges – they don’t seem to wish to free anybody – and none are peddling the newspapers of competing left-wing sects.

Yet as Italy’s moribund economy stumbles along and its bankrupt financial institutions continue to paper over the cracks, there is a tangible sense of apprehension in this city of Petrarch and Pasolini.

Pietro shows an admirable attachment to the post-World War Two order which has brought my European generation peace and prosperity but which offers so little to his.

But he is worried too. The ancient walls of the Piazza Maggiore fairly bustle with plaques commemorating the sacrifice of local partisans who died fighting Italian fascism and German Nazism. ‘Red’ Bologna’s central train station is itself a powerful reminder of the enduring nature of the fascist virus and its ability to mutate – here in August 1980 eighty-five people died when a fascist bomb went off in one of Europe’s worst terrorist atrocities.

“Now we have people who want to have an Italian Brexit,” says Pietro. “I am worried we have forgotten fascism. My grandmother was a partisan, she has told me about it. But I am worried my generation has forgotten how terrible fascism can be.”

On my way home courtesy of the appalling Mr Michael O’Leary whose airline has done more for European integration and harmony than any of Britain’s recent failed Prime Ministers, I read Volker Weidermann’s Summer Before Dark, a haunting account of German and Austrian literary anti-Nazi exiles holed up in Ostend as the world crashes towards the inevitable global conflict that will sweep so many of them away.

My mind goes back to the Via Malcontenti and I wonder – “What must Pietro’s granny make of it all?”