Jia Li, innovation intelligence consultant and Ed White, vice president, analytics at CPA Global look at why there are so few patents for game mechanics and how video game developers can make them more patentable.

More than 1.2 billion people play video games worldwide and the gaming industry injects millions of dollars into its most successful franchises. In 2009 Call of Duty: Modern Warfare 2 became the most expensive game ever to be developed, costing more than $250 million. How can game developers protect their IP in profitable games?

Pieces of the gaming puzzle

Video games have come a long way since their birth in the late 1970s and are now one of the most popular forms of entertainment. One of the ingredients that make up a memorable and engaging game is “game mechanics”.

Game mechanics refers to the interaction between game player(s) and one or more elements of the game. For example, without its game mechanics Super Mario would provide no opportunity to earn speed boosts, extra power or lives.

Game mechanics are vital for gameplay but can be easily copied by competitors – so can they be protected and how?

Collateral such as instruction manuals, source codes, and art files may be subject to copyright, but there is no form of IP that formerly protects game mechanics. Even with some materials under IP protection, developers could replicate a basic gameplay idea and publish a clone with their own original programming and art.

Patent rights protect innovative ideas that can be used to provide useful products or services. However a patent search carried out in February 2017 by Innography, a CPA Global company, showed patent applications on game mechanics are not frequently filed –only 200 patent families exist. 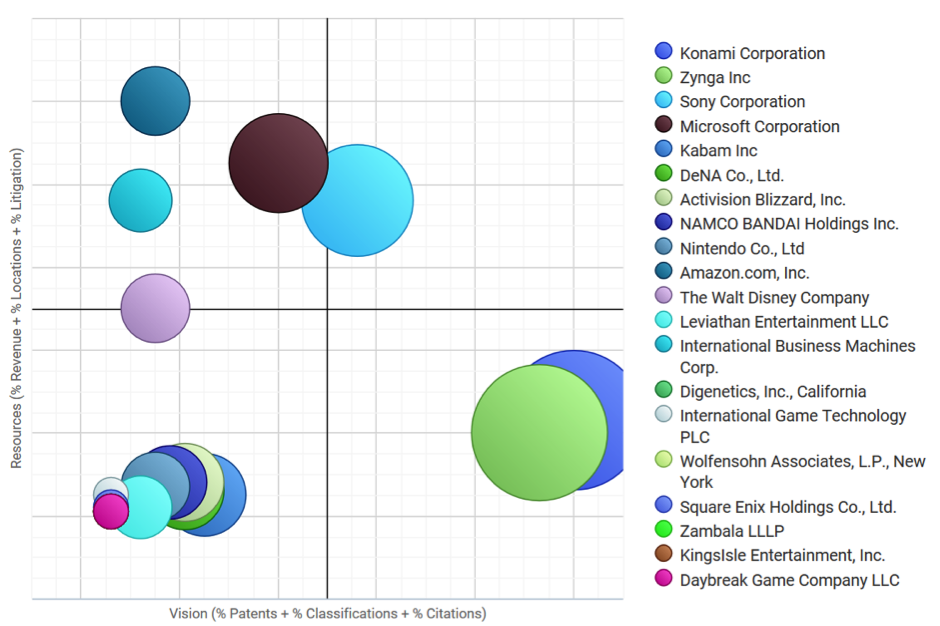 The above graph shows the top 20 game mechanic patent owners. Bubble size indicates the number of patent families. Large corporates (in the upper zone of the graph) have more resources and can afford more patents than small companies. Among them, Sony and Microsoft excel in number and strength of patent families.

The companies in the lower zone of the graph have comparatively less resources. Notably, Konami Corporation and Zynga have larger game mechanic patent portfolios than Sony and Microsoft. Konami’s game mechanics patents are more affiliated with game machines, whilst Zynga protects them as computer-implemented methods. The other well-known game developers such as Blizzard and Nintendo have also filed a small number of game mechanic patents - fewer than 10 patent families each.

Game over for patent protection?

There are a number of reasons why patents are rarely filed for game mechanics, but the overarching factor is time. Historically, a patent is published one year and six months from the date it is first filed. Post-filing, the patent will be scrutinised by patent examiners and in most cases the examiner will issue an office action, to which the applicant will then reply. There could be more than one office action and the examiner could end up re-examining the patent again and again. This process alone takes several months to complete. The games industry moves too quickly for this. Also, many games are developed by small, start-up companies who cannot afford to protect their valuable ideas.

Despite hurdles in the patent process, there are ways that game mechanics can be made more patentable. Generally game mechanics that depend heavily on hardware will receive less objection in obtaining patent rights, as these are viewed as a more tangible idea. VR gaming – with its headset addition- may be more successful in filing a patent than an app-led game. For game developers this should be a consideration when creating new material.

However, it is still possible to protect game mechanics IP. Zynga’s patent: US 9168458 (Adaptive Task Assignment For Online Games) was granted in 2015 and protects a method for engaging players in an massively multiplayer online (MMO) game. The patent claim has successfully involved storage media as an indispensable part for realising the game mechanic.

Zynga filed the patent application in May 2013 and obtained the patent in October 2015. The time from filing to grant may be too long for some companies, but for some it may be worth the time and money to secure protection.

The interactive nature of video games will be increasingly used in adjacent industries, such as the film industry, internet-of-things, automotive, retail and beyond. As augmented and immersive experiences move beyond gaming and into marketing, companies wishing to exploit these new markets will gain a broader benefit and avoid significant risk if they are protecting their IP.