Analysis: Service of proceedings via NFT on the blockchain — the future? 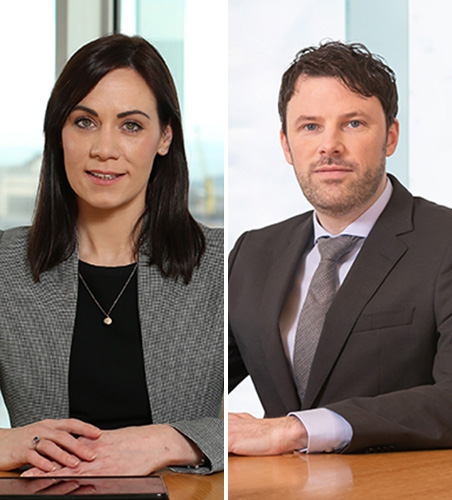 Matheson partners Karen Reynolds and Michael Byrne discuss a recent successful application in the UK courts for service of court proceedings by transfer of an NFT, and consider whether similar applications for substituted service could be on the horizon in Ireland.

In a first for the UK courts, the High Court of England and Wales in the case of D’Aloia v. (1) Persons Unknown (2) Binance Holdings Limited & Others has granted an application for service of court proceedings by way of the transfer of a non-fungible token (NFT) recorded to a blockchain.

The claimant, who founded an online gaming service provider, brought proceedings against a number of cryptocurrency exchanges and others for alleged misappropriation of £1.8 million of Tether and £190,000 of USD Coin. The claimant alleged that individuals had impersonated an online brokerage, and induced him to transfer funds from his crypto wallets to their platform. In seeking interim relief, counsel for the claimant explained to the court that it was apparent that the (alleged) misappropriated funds had been transferred to private wallets and cryptocurrency exchanges. In the course of granting interim relief, the Court also made an order that notice of the proceedings could be served on the defendants by way of an NFT to be transferred to the private wallets that allegedly held the claimant’s stolen cryptocurrency.

Although this precise question has not yet come before them, the Irish Courts have demonstrated openness to evolving technology and as such have granted novel orders for substituted service. Under the Rules of the Superior Courts, the Courts can grant an order for substituted service where ‘the plaintiff is from any cause unable to effect prompt personal service’.

The Irish Courts granted the first order for substituted service on social media 10 years ago in Daly v Lynch. In that case, Peart J granted that an order for substituted services of proceedings by way of a private message on Facebook. The defendant was not resident in Ireland, and the Court was satisfied that extensive (but unsuccessful) efforts had been made to serve the defendant in person, and that the defendant actively used the account that was to receive the summons.

In a recent High Court case, Trafalgar Developments Ltd, Instantania Holdings Ltd, Kamara Ltd and Bairiki Incorporated v Dmitry Mazepin, OJSC United Chemical Company Uralchem, & Ors [2022] IEHC 167, McDermott J granted an order for substituted service against various Russian individuals alleged to have conspired to deprive the plaintiff of the benefit of their shares in a Russian company. As the Court noted, substantial procedural delays typically arise in respect of service by way of the Russian designated authority under the Hague Service Convention. McDermott J therefore ordered that the various Russian defendants could be served ‘through a combination of post, e-mail, fax and messages to social media accounts’. A subsequent appeal by the defendants against the validity of the means of service was rejected.

The Courts examine each application for substituted service on its merits. If seeking an order for substituted service by way of a novel or innovative means, such as by way of an NFT or similar cryptoasset, given the approach of the Courts to date, an applicant will need to satisfy the Court that more traditional means of effecting service are not feasible. The applicant will also need to show that the cryptocurrency wallet is being actively used by the defendant. However, if the Court is satisfied that substituted service is merited, there is no obvious barrier to service on the blockchain. It is probably only a matter of time before a similar application is seen in this jurisdiction, and indeed, perhaps before there is a wider debate regarding whether personal service, which has long been the default, is in fact an appropriate starting point or whether service via electronic means, for example by email or text, or even more innovative avenues such as the blockchain, would provide a more reliable, evidentially sound alternative.