Weekend Books – Forty Autumns: A Family’s Story of Courage and Survival on Both Sides of the Berlin Wall 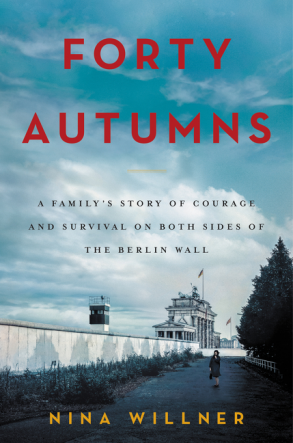 “I was five years old when I learned that my grandmother lived behind a curtain.” The line that opens this book written by a former U.S. intelligence officer, Nina Willner is, of course, a reference to the Iron Curtain.

Forty Autumns spans three generations of the author’s family living in East Germany and the United States of America. The author’s mother, Hanna, had escaped to the West post -1945. As Hanna built a life that included marriage to a concentration camp survivor, by then a serving U.S intelligence officer, her parents and eight siblings remained in East Germany, a family divided by the wall. For most of the period, there was little, if any, communication between them.

The writer, with her background, provides a unique perspective on post- 1945 history and the Cold War as well as gripping insight into this important period of European history.

It offers something for a number of groups of readers. That includes those old enough to remember before the Iron Curtain was established in the early 1960s, those who remember a divided Germany and the fall of the Wall in 1989 and those who have grown up with only a united Germany. It shows just how the events of what we now understand as European history affected the destiny of many families. The author’s family, the Willners, is only one fascinating story now preserved for all to read and learn from. Though rather under-stated, the Willner family had already lived through the trials of the Second World War.

The account of the East German regime makes for uncomfortable reading. Her depiction tends to be rather monochrome, perhaps, of necessity, given how life in East Germany tends to be viewed. The brooding influence of the Stasi cannot be underestimated and is not underplayed. Hanna’s family did not remain unaffected by the consequences of their daughter’s exodus to the West. Retribution was taken by their exile to a remote farming town in East Germany to prevent the spread of any possible dissent including a requirement that the author’s grandfather, formerly a teacher, underwent intensive re-education. An experience that contrasts with the more colourful account of life in the United States as that is the experience of the author herself. A constant theme of the book is the idea of “reunion and rebirth”.

A real strength of this book is its historical chronology that maps out the family history against the backdrop of the Cold War. There is an index as well as an extensive bibliography for those interested in taking their reading forward.

Though Forty Autumns may sound like fiction, especially when depicting the breathless and frightening escape by Hanna through the wall. The book sits in its place on the non-fiction shelves. Perhaps the abiding memory to take away is that provided by the use of precious family photographs providing a stark pictorial contrast of living conditions between the West as in the USA and the East. It reminds us of what the Willner family went through. Touchingly, the picture of family members together running the Berlin Marathon presents a lasting image of the unified Germany and consequentially, the now united Willner family.

Forty Autumns: A Family’s Story of Courage and Survival on Both Sides of the Berlin Wall by Nina Willner. Pub by Little Brown, 416pp £20​ (Hardback).