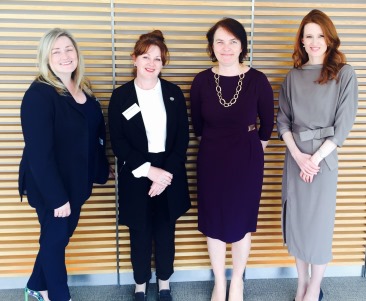 Dublin firm Matheson has hosted a networking and information-sharing event for women working in tax.

The subject was discussed by a panel including Lorna Gallagher, the newly appointed appeal commissioner; Cora O’Brien, policy director with the Irish Tax Institute; and Grainne Clohessy SC.

The establishment of the new Tax Appeals Commission earlier this year intends to enhance Ireland’s existing appeals system and provide an independent and transparent system for dealing with tax appeals.

During the discussion Commissioner Gallagher outlined some of the procedural aspects of the new system focussing on some of the key differences compared to the old system.

Cora O’Brien, who had been heavily involved in the consultation process, highlighted some of the lessons learnt from that process and the benefits of engaging consistently on tax policy matters.

Grainne Clohessy, who frequently acts for taxpayers and Revenue in Irish tax disputes, provided valuable insights into the practical aspects of tax disputes.

The event also provided an excellent networking opportunity for the attendees all of whom work in tax in Ireland.

Matheson has acted in Irish tax cases at all levels, including the Court of Justice of the European Union. We are currently advising many taxpayers on the transition to the new tax appeals system.

Future WiTii events will be advertised through its LinkedIn group.