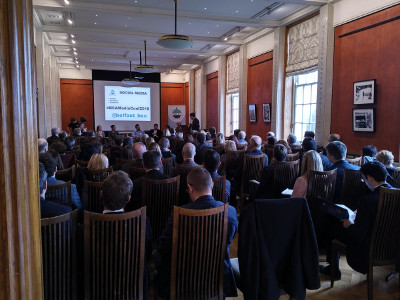 More than 100 lawyers and media professionals convened in Stormont on Friday at a conference organised by the non-profit Belfast Solicitors Association (BSA).

The event, headlined A Brave New World for the Media & Creative Industries Landscape, was billed as an opportunity for lawyers “to come together with the media industry and business community”.

It was addressed in the morning by Lord Justice Gillen and by Alastair Ross MLA, chair of the Assembly’s Justice Committee.

The third of four diverse sessions held over the course of the day-long conference examined media from a legal perspective.

Olivia O’Kane, BSA chair and media lawyer at Carson McDowell, addressed the conference on freedom of expression, examining how rights afforded by articles 8 and 10 of the European Convention on Human Rights can come into conflict.

John Battle, head of compliance at ITN, tackled the issue of court reporting and warned that a decline in numbers of court reporters could turn the courts into an “alien world” for ordinary people.

He called for a court reporting charter, with a “duty of assistance” put upon court staff and officials and a “constant review of open justice in the courts” examining issues like filming sentencing.

Michael Kealey, head of legal at Associated Newspapers, spoke about challenges facing the media south of the border.

Mr Kealey said inflation in damages awards for defamation in Ireland “will close newspapers” if allowed to continue.

Gill Phillips, head of legal at Guardian News & Media, encouraged Northern Ireland lawyers to press for defamation reform, describing the disparity between laws in Northern Ireland and in England as “bizarre”.

Ms Phillips welcomed the Defamation Act 2013, which applies to England and Wales, and said its test of serious harm meant fewer cases now go before the courts in England.

Lawyer Nazli Selek won the loudest applause after addressing the conference on press and journalistic freedom in Turkey.

Ms O’Kane told Irish Legal News: “As Chair of the Belfast Solicitors’ Association, it was a huge honour for me to host over 100 delegates at Stormont on Friday 26th February 2016 to celebrate with us ‘A Brave New World for the Media & Creative Industries in Northern Ireland’.

“Stormont has been at the centre of much media coverage over the years often focusing on challenges and change that have taken place.

“I therefore could not think of a more appropriate venue for our conference which focused on the changes, challenges and growth of the media industry in Northern Ireland today.”

She added: “The panel and delegates discussed the impact of the changing media landscape on broadcasting and print journalism, the importance of a free press and the challenges that arise for investigative journalism.

“Delegates heard about public service media, learning about traditional broadcast platforms as well as new online platforms together with gaining an insight into the film and animation industry. We heard about the music sector and learned of top tips to protect intellectual property.

“Amongst this broad overview delegates heard from the most respected lawyers working in the media industry from all over the UK, Ireland and Turkey.

“Each panel was skilfully chaired by Jim Fitzpatrick, whose knowledge and experience in the media industry shone through in his pointed and carefully considered questioning of the panel speakers.”