Lawyer of the Month: Stuart Gilhooly 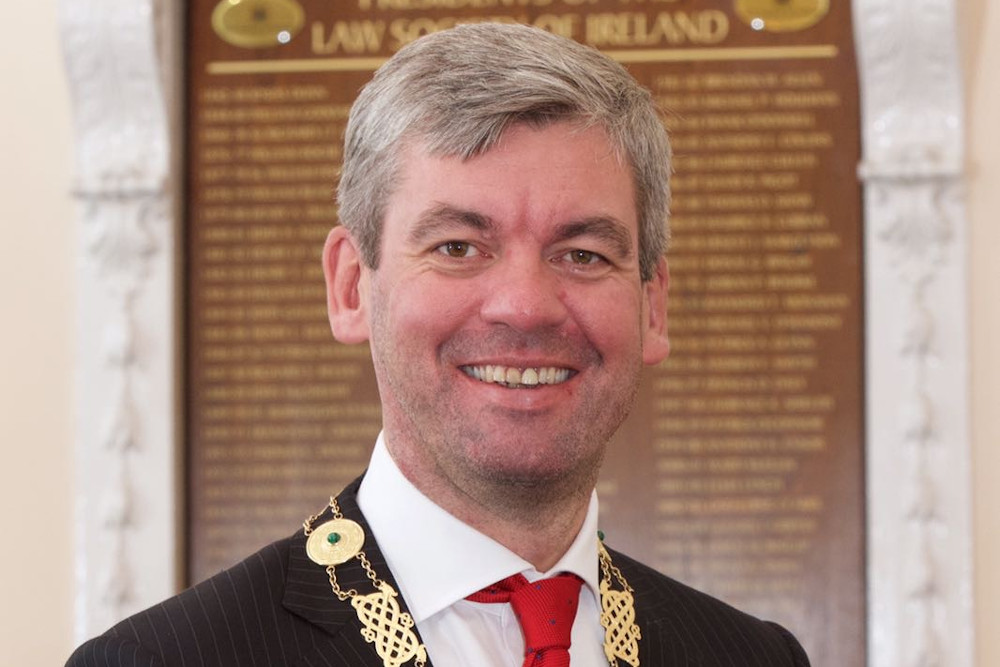 Stuart Gilhooly, pictured during his term as president of the Law Society of Ireland

Coming from a legal family, Stuart Gilhooly SC, partner with HJ Ward & Co in Dublin, says it was always at the back of his mind that he was likely to pursue a career in that profession. But that didn’t stop him from considering other options, in particular journalism when he was a young person with a love of writing. As he got closer to his Leaving Cert at school, he decided the legal route was the one for him, perhaps influenced by his father who was a barrister. “I’m not sure whether it was my father who talked sense into me or not,” he jokes.

Mr Gilhooly says he was not inclined to become a barrister as he had witnessed how difficult that life can be and the struggles they can face to make money in the first five to 10 years of their career. He decided to study law at University College Dublin and do a diploma in business school, followed by a training contract with HJ Ward & Co Solicitors – a firm he has stayed loyal to since. “I’ve never worked anywhere else and I’m now in my 30th year with the firm. I joined in 1992 as an apprentice, as they were then called then. I didn’t see myself being there forever, but I will probably never leave at this stage,” he says.

In the late 1990s and early 2000s there was a lot of pressure on the price of insurance in Ireland, as there still is, he explains. One of the remedies suggested back then was the creation of the Personal Injuries Assessment Board (PIAB), that still exists today. At the time of its formation, the concern was that it would be detrimental to clients and the Law Society fought against it. However, it came into being and, according to Mr Gilhooly, it works well and is less adversarial than might have been feared at the outset.

Turning to sports law, Mr Gilhooly has built a big reputation in that area and been involved in some high-profile cases. He appears to be driven by a love of sport that he’s had throughout his life and finds that part of his legal work greatly rewarding – even if it’s not the most financially lucrative. And his achievements have recently been recognised with him being named Sports Lawyer of the Year at the 2021 Irish Law Awards.

He says: “I played football as a kid and young adult. I played for Malahide United, a fairly big amateur club in Ireland. People would have known I was a big football fan.”

He first got involved in sports law after being approached in the early 2000s by a friend he had studied with about an issue concerning a positive drugs test for cocaine faced by a player called Barry Ryan who was a goalkeeper for Shamrock Rovers. Mr Gilhooly got involved in the case and came into contact with Fran Gavin who was general secretary of the Professional Footballers’ Association of Ireland (PFAI), as well as being someone he had played football with at Malahide United. Mr Gavin asked if he would do some legal work for the PFAI. Mr Gilhooly accepted and has been acting for the players of Ireland since 2003. He says current general secretary Stephen McGuinness has taken the PFAI to a new level in terms of how it looks after footballers, both men and women.

One of the most well-known cases that Mr Gilhooly has been involved with concerned the Ireland women’s national football team – ‘tracksuit-gate’ as it was dubbed by some in 2017. “The women’s national team was effectively underpaid and under-resourced. The Football Association of Ireland (FAI) really had no money and no real interest in women’s football. They would just be penny-pinching when it came to women,” explains Mr Gilhooly. The women wanted proper remuneration and resources and sought help from Mr Gilhooly and his colleagues.

He adds: “After years of trying it was going nowhere so we eventually held a press conference in Liberty Hall and exposed the FAI for what they were. One of the big stories that came out was that the women who were playing matches had to give their tracksuits back afterwards or change into them in the toilets because they weren’t allowed to keep them. It was absolutely extraordinary. More importantly they weren’t getting paid for these games. They were all working and it was costing them money to play international football, which is ludicrous.”

That press conference took place just over four years ago, but Mr Gilhooly says things have moved on for women’s football since then with international team players receiving the same wages as men and now they generally get treated with respect.

He adds: “That’s just one example of my work. I generally act for male players of the League of Ireland on all sorts of different complaints and problems, from players getting sacked for being too fat to issues like receiving bans for prohibited substances or alleged racism or betting on matches.

“I love all sport. Having the opportunity to change things in a small way is really important. It’s really interesting; it’s not about the money as it doesn’t pay me much.”

An extremely high-profile case that Mr Gilhooly handled involved Igor Labuts, the former Athlone Town goalkeeper who was convicted of match fixing. The final outcome of this case – winning for Mr Labuts at the Court of Arbitration for Sport (CAS) – is one of Mr Gilhooly’s career highlights.

He says: “I don’t think any case has given me more joy than winning that one. We had lost it three times before we won it in CAS. It was the first time I had ever been in CAS. And it’s the first time, that I’m aware of, that any individual athlete in Ireland has ever won a case in CAS against an institution. It was a big result for us, and it made a big difference too in terms of world sport.”

Mr Labuts was initially given a one-year ban from football by the FAI in September 2017 after suspicious betting patterns were detected in a game he had played in and Athlone had lost. He appealed and lost, and lost again when the decision was challenged, before CAS in Switzerland finally dismissed the charges.

The goalkeeper had been convicted of match fixing based on his performance and video evidence of how he played on the day. “We said that was just not enough,” explains Mr Gilhooly. According to Mr Gilhooly, if that was enough evidence, every player who performs badly would be looking over their shoulder and worrying if something similar could happen to them. He describes the final outcome at CAS as a ‘big result’. “The world of football supported us all the way,” he says. “In terms of global reach and personal satisfaction, I would say that’s my highlight.”

But Mr Gilhooly also gets great career satisfaction from his personal injuries work in representing people that have suffered injuries that are, in some cases, life-changing. “You see some really tragic cases. Unfortunately you can’t change their injuries, you can’t change the way their lives have become. All you can do is try to provide them with some money that will ease the pain in some way and make their lives a bit easier.

“I’ve never come across a client who has said to me that I’m glad I got those injuries. They will always say to you if I could turn back the clock to the day before the accident I would do that. Nobody wants to make a claim and nobody wants to make money from their injuries. All we can do is try to get a bit of recompense.”

He gives the example of a women he acted for who had what was initially a minor injury with a broken arm, but she then lost the power in both arms and her legs. “It was very unusual, but was undoubtedly the result of her accident. It went from being a relatively minor case to one where we were determined to get her good compensation, which we ultimately did. That was a very satisfying moment in getting the comfort of knowing she would be able to afford to live her life as best she could,” he says.