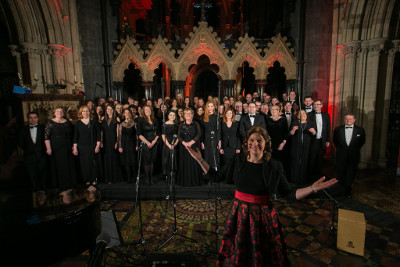 A choir made up of more than 50 staff members at A&L Goodbody raised cash for charity at its annual Christmas choral concert in Dublin.

The choir took to the stage in Christ Church Cathedral on Sunday to raise money for DePaul Ireland, a charity that supports people who are homeless or at risk of homelessness.

Directed by Anna-Marie Curran, partner in the firm’s EU, competition and procurement team, a wide arrangement of carols were performed and accompanied by A&L Goodbody’s talented musicians on organ, piano, guitar and cajón percussion.

Earlier, the choir performed with The Staplestown Millennium Choir as part of a Summer 2016 programme of music at Castletown House.

In 2015, they competed in the finals of the Workplace Choir of the Year, performed at the Rule of Law Gala and recorded a song alongside the St. Joseph’s National School Choir, East Wall for Lyric FM.