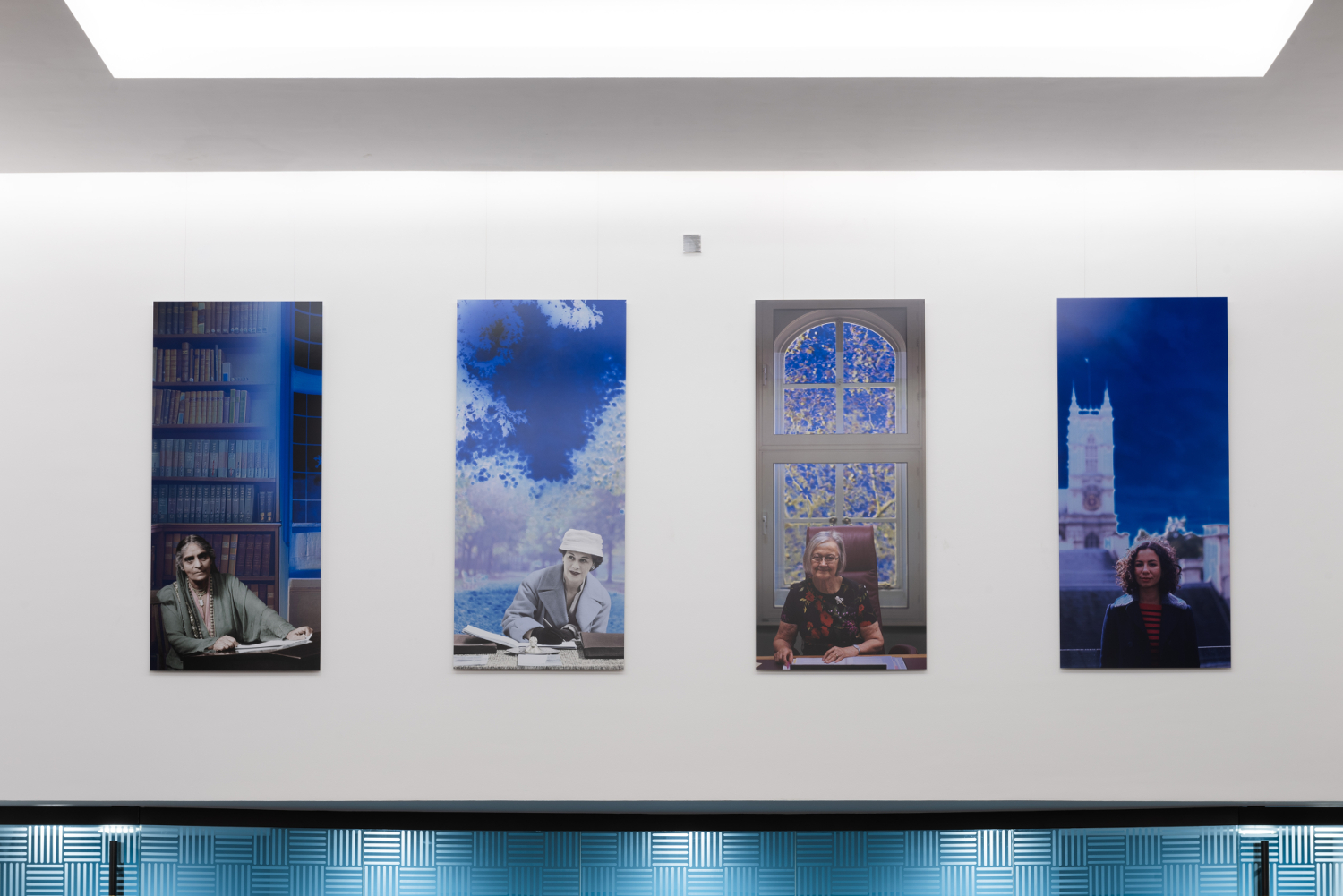 The first UK Supreme Court artwork featuring women from the legal profession has been unveiled, commemorating the centenary of the 1919 Sex Disqualification (Removal) Act, which paved the way for women to practise law.

Commissioned by Spark21, the charity managing The First 100 Years campaign and created by artist Catherine Yass, the artwork depicts female legal pioneers, The Right Hon Baroness Hale of Richmond DBE, the first woman president of the Supreme Court, Rose Heilbron, the first woman recorder (part-time judge) and Cornelia Sorabji, the first woman to ever sit the Bachelor of Civil Laws exam at Oxford University. It also looks ahead to the next 100 years with a representation of a female lawyer of the future.

Ms Yass has worked with archival photographic images as well as her own photography to create a continuum that documents both the progression of women in the law over 100 years and the development of photography in the same period. Each of the four portraits form part of a larger group composition, reflecting the nature of women’s emancipation movements globally.

The artwork forms the centrepiece of courtroom two, where the first majority-female court – three out of five justices – sat in October 2018. Speaking at the unveiling were Dana Denis-Smith, trustee of Spark21 and founder of the First 100 Years, Baroness Hale, Justine Simons OBE, deputy mayor of London for culture, Catherine Yass and Dominic FitzPatrick, the senior partner from Taylor Wessing, the law firm supporting the unveiling reception.

Ms Yass trained at the Slade School of Art in London, the Hochschüle der Künst in Berlin and Goldsmiths College, London. In 2002, she was shortlisted for the Turner Prize and has since been awarded commissions and exhibited extensively. Her work features in a number of major collections worldwide. She is represented by Alison Jacques Gallery, London.

She said: “Up until 1919 women were dismissed from entering the law on the grounds they were not considered ‘persons’. 100 years later I hope that this commission shows that they were indeed ‘persons’. It has been a great privilege to be given this commission at such a crucial moment for women and for Britain. Recent events have shown how instrumental the Supreme Court is in safeguarding our rights and democracy.

“I hope that the commission will play a small part in representing and promoting the role that women can play in shaping law reform, and that it will encourage new and diverse lawyers whose values will in turn impact on our society.

“I am grateful to Baroness Hale, Spark21 and the Contemporary Art Society for making this commission possible. It has given me the opportunity to work alongside four pivotal and inspirational women, and through working with archival and new imagery has expanded my photographic practice as well as my understanding of the law.”

Baroness Hale said: “It is important that the story of women in the law can be shared with and understood by visitors to The Supreme Court. I hope that each of the women depicted – past, present and future – will be seen as a role model, especially by our younger visitors. The Supreme Court is enormously grateful to Spark21 for raising the funds for this new work of art.”

Fabienne Nicholas, head of consultancy at the Contemporary Art Society, added: “We are delighted to have worked with Spark21 and the Supreme Court to realise such an important artwork. Catherine Yass is respected as one of the great British artists of her generation and her appointment lends the commission real gravitas.

“Her work for Courtroom Two is multi-faceted: it chronicles the evolution of photography over the past hundred years, the struggle for women’s emancipation in that same period, and the histories and future of women working in the UK legal professions. The first portraits of women to hang in the Supreme Court, Yass’ work is a welcome addition to the collection which will inspire a whole new generation of legal professionals.”

Ms Denis-Smith commented: “Pioneering women, including Baroness Hale, Rose Heilbron and Cornelia Sorabji, have made staggering achievements in the legal field over the last 100 years.

“Now, for the first time, female legal pioneers are being celebrated and commemorated at The Supreme Court, the pinnacle of the legal justice system in the UK. The artwork sends a powerful message about the value of women’s contribution to the law as we near the end of this centenary year and look to the future.

“This is a huge achievement for Spark 21, the charity behind the First 100 Years project. By making this donation to the nation we are fulfilling our legacy mission to leave a visible trace for women of the next 100 years. We hope that its presence in the Supreme Court will inspire female lawyers, including the 96 young women named alongside the artwork as part of our #GiftHerFuture campaign.”