Finucane murder was followed by ‘assault on the rule of law’ 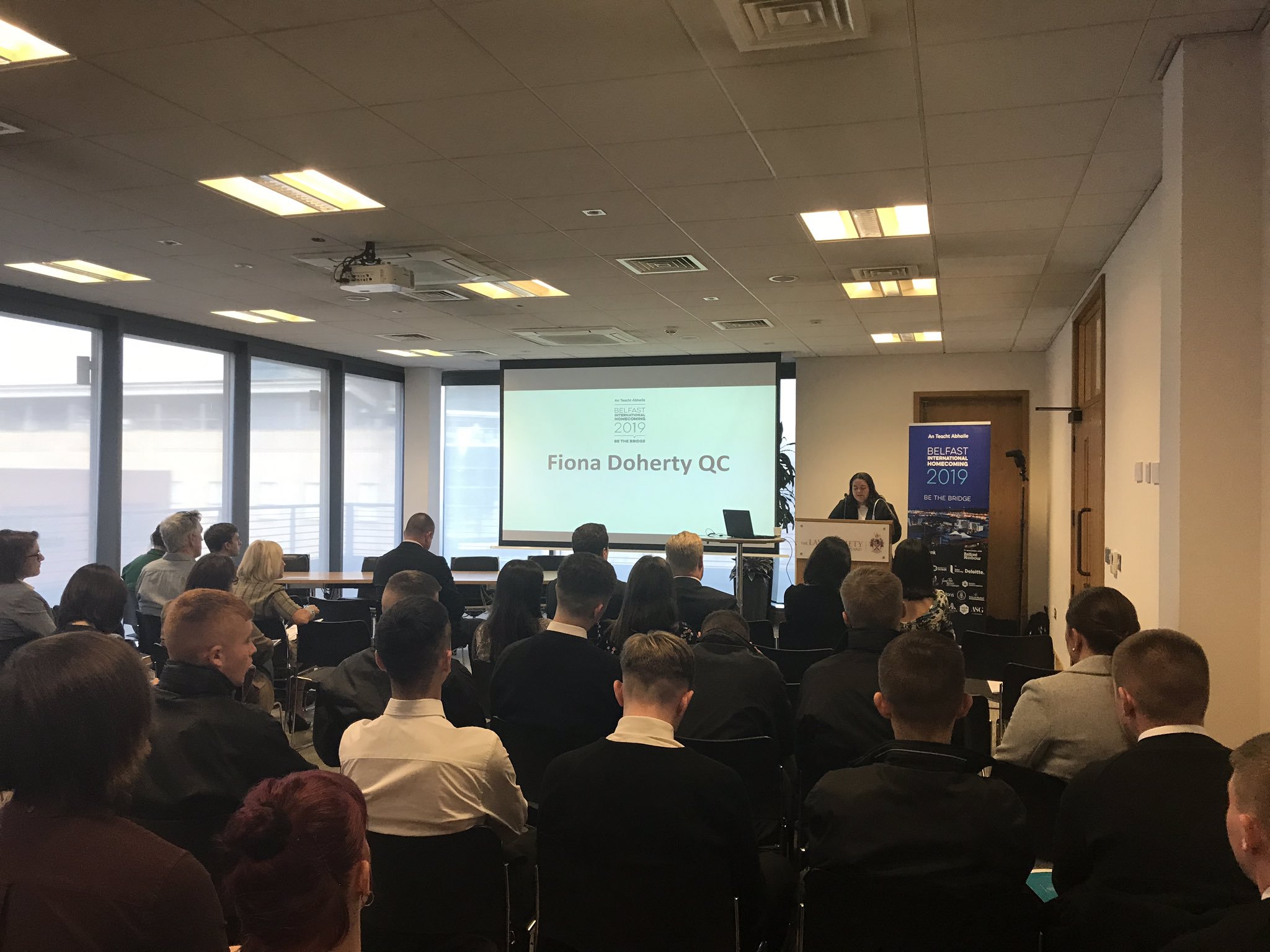 The murder of Belfast solicitor Pat Finucane was followed by “nothing less than an assault on the rule of law and the very fabric of a democratic society”, a senior barrister has said.

Fiona Doherty QC, part of the legal team for widow Geraldine Finucane and her family, spoke at the fifth annual Belfast Homecoming Legal Symposium at Law Society House yesterday about the ongoing campaign for the truth about the 1989 killing.

She spoke about the long road to victory in the UK Supreme Court earlier this year, inaccurate reporting in the media, and the UK government’s continuing failure to respond to Lord Kerr’s damning judgment over eight months later and over 30 years after Mr Finucane’s death.

Paying tribute to Mrs Finucane’s “resilience and dignity”, Ms Doherty said that “in addition to celebrating women lawyers, we should not forget women whose lives ground cases that make the law – because, really, they are the true inspiration”.

Opening her speech, Ms Doherty said that “every time I sit down with the case, it shocks me all over again”.

She continued: “It is not just about horrendous events of the evening of the 12th of February 1989, when Pat Finucane was shot 14 times in front of his wife and children as they were having their Sunday dinner – that is shocking enough. But what happened afterwards was nothing less than an assault on the rule of law and the very fabric of a democratic society.

“You hear the term cover-up used very often – this was a cover-up, or an attempt at one. Even now, significant questions surrounding it have not been answered.”

Emphasising that revelations keep emerging about interference with investigations into the case, Ms Doherty referred to the BBC Spotlight broadcast earlier this month, which exposed the fact that members of MI5 visited Judge Peter Cory’s offices during the Cory Collusion Inquiry and removed hard drives, erasing them before being returned. This incident was confirmed by a Canadian judge who worked as counsel with Judge Cory at the time of the inquiry.

Ms Doherty outlined the family’s extended fight for the truth about Mr Finucane’s murder, the history of obstruction in the case, and the broken promises of a public inquiry.

When launching the proceedings, challenging the previous coalition government’s decision to direct a “review” rather than a public inquiry, Ms Doherty said: “This was always a case where we thought it might have to go all the way through the courts’ system. As it turned out, it did.”

In his High Court ruling in June 2015, Mr Justice Stephens said: “It is hard to express in forceful enough terms the appropriate response to the murder, the collusion associated with it, the failure to prevent the murder and the obstruction of some of the investigations into it.

“Individually and collectively they were abominations which amounted to the most conspicuously bad, glaring and flagrant breach of the obligation of the State to protect the life of its citizen and to ensure the rule of law. There is and can be no attempt at justification.”

Mr Justice Stephens granted relief only in a very limited respect, which did not achieve the outcome that Mrs Finucane wanted. On appeal to the Court of Appeal in February 2017, the outcome was really a step back from the High Court decision.

However, in February 2019, the UK Supreme Court confirmed what the family knew all along: that there had not been an Article 2-compliant investigation.

Lord Kerr, delivering the judgment over 30 years after the murder, said that there was yet to be an effective investigation.

Because of the UK’s incorporation of the European Convention of Human Rights into domestic law through the Human Rights Act 1998, the right to an effective investigation into deaths where there is direct or indirect involvement of the State or its agents is guaranteed by Article 2 of the ECHR.

Stating that the case “was not without its complications”, Ms Doherty outlined the State’s argument that ECHR guarantees did not apply to this case because it occurred in 1989, and the Human Rights Act 1998 came into force in 2000.

Ms Doherty said this was an argument made in many legacy cases, but that the Supreme Court judgment “went some way to resolving this retrospectivity problem… which has been important for other cases where the issue arises”.

Lord Kerr made several important findings, which led to his conclusion that the right to an effective investigation did apply to this case, and that then provided the framework for the Court to find that the investigations that had taken place to date had not been effective.

Ms Doherty said that this was crucial, because if the Article 2 right had been found not to apply, the argument that it had not yet been fulfilled could not have succeeded, and as a result, there would have been no requirement on the judgment to take any more action in the case.

In media coverage of the case, many media outlets said that Mrs Finucane had lost her case because the Court did not order the holding of a public inquiry.

Ms Doherty said: “Just to make it clear, Mrs Finucane did not lose her case. The Court concluded that there had not been an Article 2 compliant investigation into her husband’s murder and that the State is obliged to decide what steps to take to make that obligation.

“As public lawyers know… UK courts rarely grant relief or an outcome which compels a particular result, preferring instead to spell out the correct interpretation of the law and allow the public authority involved to retake the decision.”

Solicitors acting for Mrs Finucane wrote to the Northern Ireland Secretary after the judgment, arguing that the only possible Article 2-compliant investigation would be the establishment of a public inquiry.

“Sadly, nearly eight months later, the government is yet to indicate what steps it is going to take in response to the judgement,” Ms Doherty said.

“The delay has been such, that regrettably we have had to launch further proceedings, and I have just come from Court this morning where an initial hearing was held into those new proceedings.

“So, unfortunately after over 30 years of campaigning, and being in the unique position of having European Court of Human Rights and UK Supreme Court judgments in her favour, this particular battle is not yet over for Mrs Finucane.

“Because this is a session entitled Women in Law, I am going to finish by paying tribute to her. Her resilience and dignity are remarkable, and I will ask you to remember that, in addition to celebrating women lawyers, we should not forget women whose lives ground cases that make the law – because, really, they are the true inspiration.”