Stark warning over ‘crisis of unmet legal need’ in Ireland 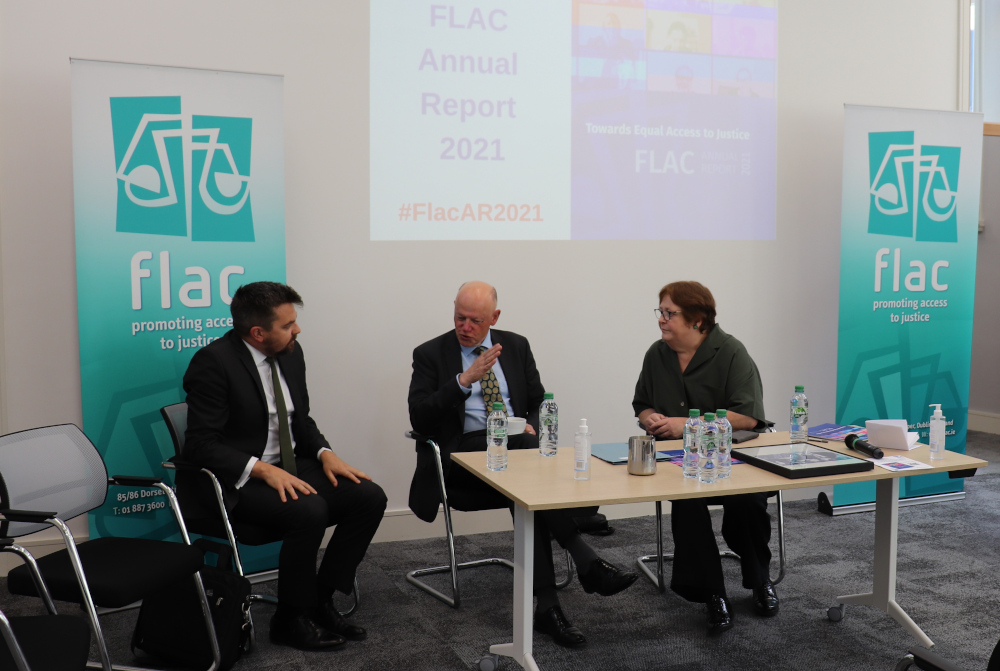 The combined impact of the pandemic and increased financial pressure on individuals and households has exacerbated the “ongoing crisis of unmet legal need in this country”, the head of legal rights group FLAC has warned.

Writing in the foreword to FLAC’s annual report for 2021, FLAC chief executive Eilis Barry said the “overwhelming demand for legal information, advice and advocacy continued to exceed our resources, despite the addition of new staff, further resources and expertise”.

The report was launched this morning at an event addressed by Chief Justice Donal O’Donnell, who said FLAC “has established itself as an institution, and an invaluable one, which over the course of its history has campaigned for change, protected the weak, challenged the strong and educated us all”.

There were 13,147 calls to FLAC’s telephone information and referral line in 2021, the highest number since 2015. Around 30 per cent of queries related to family law matters such as divorce, separation, domestic violence and custody and maintenance issues.

Ms Barry said: “Callers were stressed because they didn’t qualify for legal aid, many narrowly missing the means test. In one particular case, a caller was over the legal aid means test by €500 and had incurred legal costs in a contested family law matter of in excess of €20,000.

“Many callers try to navigate the courts system alone. FLAC have nowhere to refer these ‘lay litigants’ who are desperately trying to who are completely daunted by court forms and procedures.

“We also heard from callers contacting FLAC in situations where they had been served with legal proceedings but were facing many months of delay in being approved for legal aid.”

Employment law queries were the second highest area of queries in 2021, while queries relating to housing matters were up over nine per cent on the previous year. There is currently no legal aid for employment and discrimination claims before the Workplace Relations Commission (WRC).

“It is important to note that these figures are just the tip of the iceberg as FLAC cannot answer every call made to our phone line,” Ms Barry said.

“We are concerned that significantly more people are trying to get through and are unable to, despite our increasing staff and resources on the phone line. There has to be a better way to provide services that enable access to justice.”

“Even access to tribunals such as the WRC – which deals with discrimination cases in the first instance – and which is supposed to be accessible for people without representation is impossible for many without access to legal advice and representation.

“The harsh reality is that FLAC cannot provide representation beyond a very limited number of cases. However, services such as the Traveller Legal Service provide a model for how the right of access to justice of such communities may be vindicated through the provision of dedicated legal services with the involvement of the community.”

FLAC’s policy work over the last year has focused on placing equality at the heart of pandemic response measures, and highlighting issues arising in new and existing consumer debt cases in light of the pandemic.

Paul Joyce, senior policy analyst with FLAC, said: “The negative financial impact of Covid, the rising cost of living and the housing crisis really do create the perfect storm where financial difficulties become more long-term then short-term and where those marginalised and in more precarious employment are more likely to face persistent over-indebtedness with all the stress that entails.”