Judge hits out at ‘noise and filth’ of Co Kerry courthouse 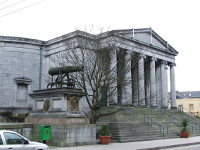 A District Court judge has called for action to overhaul a Co Kerry courthouse which he said was disrupted by “noise and filth”, the Irish Examiner reports.

Judge James O’Connor told this year’s first sitting of Tralee Court House that he would no longer tolerate the poor conditions within the courthouse, which was built in 1835 and has faced scrutiny from local politicians.

He told the court: “The Tralee Court is the most awkward court I go to. Something will have to be done to police the hall. The place is filthy … fag butts and coffee cups everywhere.”

Judge O’Connor also hit out at people “yapping and talking all morning at full belt” outside the courthouse, and called on gardaí to “get them off the steps and out of the precincts of the court completely”.

He made the remarks as part of his announcements for 2016.

Judge O’Connor launched a similarly strong-worded attack on court procedures at Killarney District Court earlier this week, when he announced that cash would no longer be accepted in contributions to the court’s poor box.

He also expressed his exasperation with delays to court proceedings caused by some solicitors and gardaí.