He spoke about the economic recovery and warned against a return to “business as usual” without addressing the rights of the most vulnerable in the country.

Mr Farrell said: “I have argued in this lecture that there are serious problems of poverty and neglect in our society that I do not believe will be remedied by a rising tide lifting all boats – that is if the tide rises significantly at all.

“We must not go back to ‘business as usual’ and we must try to use the lessons from the crisis to put in place mechanisms to protect the vulnerable against any future crisis and to repair as much as possible the damage done by the crisis just passed.

“I have suggested as well that there is an opportunity now to make significant advances because there is a new openness to debate and to change, especially in the run-up to the election and to the commemoration of 1916 which will hopefully prompt reflections on how we can and must do better in the second century after the Rising.” 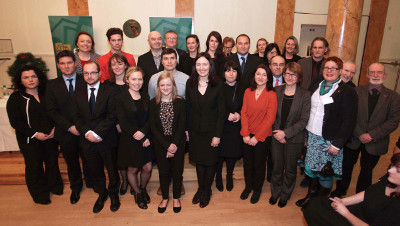 After the lecture, awards were presented to 77 solicitors and barristers who volunteer with FLAC, mainly through the legal advice centres which FLAC runs in partnership with Citizens Information Centres and the Public Interest Law Alliance.

Noeline Blackwell, FLAC director general, said: “These people are part of a strong, countrywide movement of volunteers who advance access to justice by passing on legal knowledge that people need in their daily lives. They also are part of the tradition of achieving social justice through the law that Michael so fluently speaks of tonight.

“FLAC is indebted to them all for their steadfast commitment and we are delighted they are here tonight to receive our Golden Pin for 2015.”