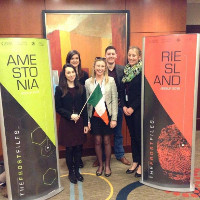 Sarah Morrissey and Emmet Connolly narrowly lost out to MGIMO University of Russia on written submissions, having beaten them in the oral argument.

The national round to select the Irish representative was held at UCD last month, where the Law Society of Ireland triumphed in two rounds, as both Applicant and Respondent, against the King’s Inns.

Ms Morrissey told Irish Legal News: “As the largest international moot court competition the Jessup was a challenging, at times stressful and overall rewarding experience. Over the course of six months our team researched, drafted, edited and engaged in weekly oral prep sessions.

“We mastered legal arguments around admissibility, cyber surveillance, anti-terrorist detention statutes and cyber-attacks and were fortunate enough to have the opportunity to test our ideas and skills against law students and before judges from around the world in what was a fantastic week in Washington DC.”