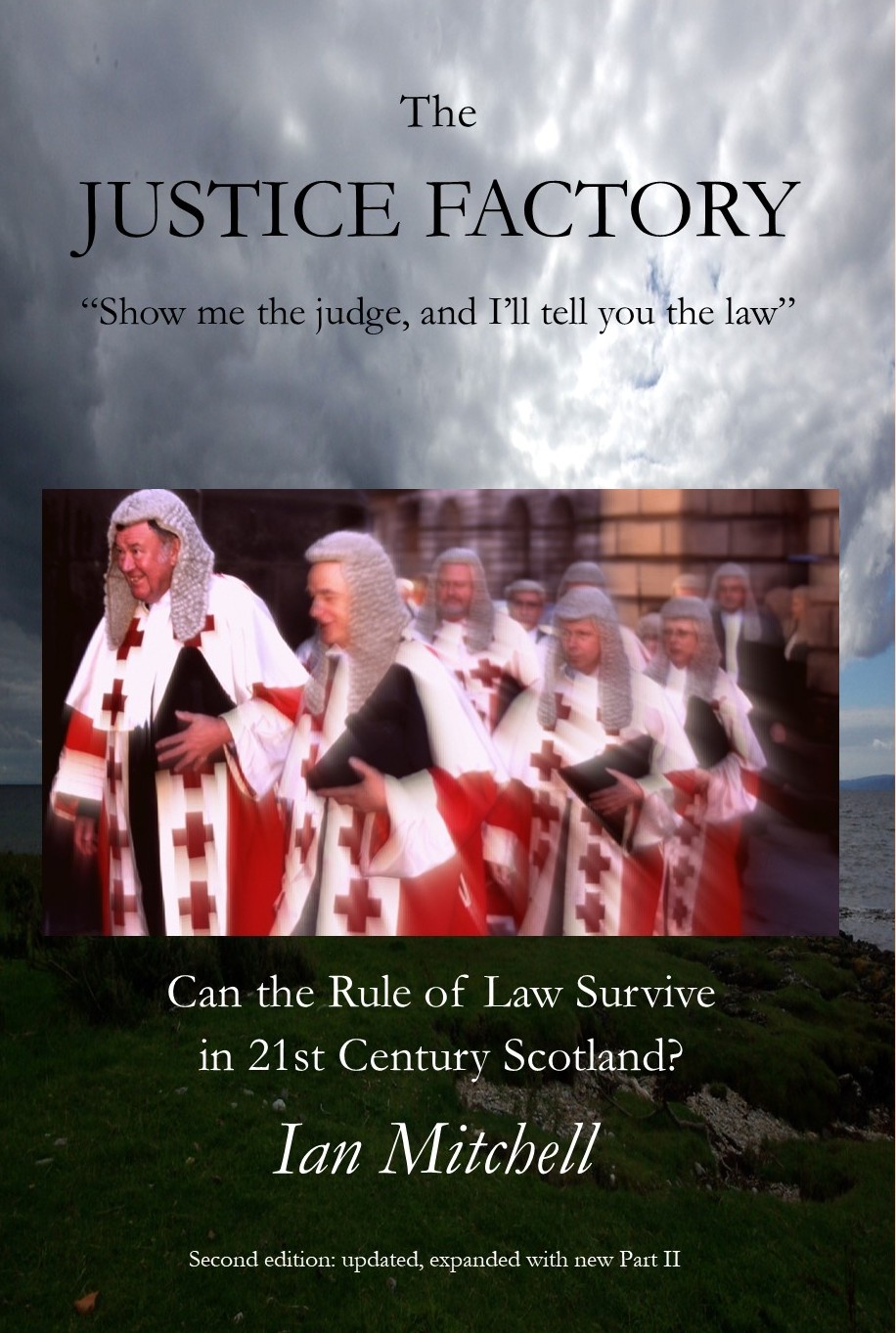 Scotland is becoming a state in which the population is forced to conform to the vision and values of the ruling elite, a new book argues.

In The Justice Factory: Can the Rule of Law Survive in 21st Century Scotland?, author Ian Mitchell suggests that the country is on the road to becoming an authoritarian Rechtsstaat, a term defined by historian Sir Richard J. Evans as a state “which [is] ruled through law rather than being ruled by it”.

Of the author, who grew up in apartheid South Africa and lived in Russia for 12 years, Lord Hope writes: “He saw what happened there, and he worries about whether it is at risk of happening here.” Professor Page says that power and consent, crucial issues of the Claim of Right, have, ironically, fallen out of focus since devolution. He writes: “It is as if it is enough that we have a parliament. How well it works does not matter.”

The book finds that, since the inception of the Scottish Parliament in 1999, the executive has gathered more and more power for itself and that Scotland now bears the hallmarks of an incipient Rechtsstaat.

Mr Mitchell argues that the lines between the civil service and the government have become blurred; ministers have refused to take responsibility for their departments; an excess of legislation has been introduced, which is poorly scrutinised in committees; that in at least one instance a judicial candidate preferred by the government was selected by an ostensibly independent body; and that much of the government’s behaviour is driven by a “hyper-moralism” which has had a chilling effect on freedom of speech in Scotland and is backed by a state-controlled police force whose unification threatens to render it a gendarmerie in the future.

He identifies a pattern of illiberal decisions beginning with Donald Dewar’s attempt to invest ministers with the power to fire judges in the first draft of the Scotland Act; an attempt that was crushed by the late Lord McCluskey, and continuing to the present day with the now-repealed Offensive Behaviour Act and the Hate Crime Bill.

He criticises the committee system at Holyrood, which fails to ensure adequate scrutiny of bills, while its unicameral structure inhibits their proper debate. A study by academic Anthony May is cited that found the legal basis for the Offensive Behaviour Act – which criminalised certain behaviour at football matches – was questionable but that its “potential political yield was high” because it would attract votes from the Celtic-supporting Catholic community since it expressly criminalised expressions of Unionism. This would imply that it was passed for purely political ends before the 2014 independence referendum. “This is an example of using parliament not to govern but to promote a sectional party interest,” Mr Mitchell writes.

The author also highlights the politicisation of the civil service in Scotland. Before the independence referendum in 2014, the government produced a 670-page guide entitled Scotland’s Future: Your Guide to an Independent Scotland. Despite being an openly partisan publication, it was prepared by the civil service. Mr Mitchell writes that it is “a serious abuse of the principle of civil service impartiality for government employees, working at the taxpayers’ expense and supposedly without policy bias, to be ordered by their political ‘masters’ in government to produce a document arguing one side only in a national referendum.”

The abuse of civil service neutrality was raised in a report by the House of Commons Public Administration Select Committee, which found that public funds and civil service personnel should not have been used to produce the guide. The author suggests it was produced by then Deputy First Minister Nicola Sturgeon in conjunction with the head of the civil service at the time, Sir Peter Housden, contrary to the Scottish Ministerial Code. Mr Mitchell writes: “This is going a long way outside the conventional relationship in Britain between government and civil service, which has always tried to stay politically neutral.”

Excessive lawmaking – ‘legislative hyperactivity’ – is identified as another feature of a Rechtsstaat in the book. Research by legal academics Professors James Chalmers and Fiona Leverick found that “Holyrood’s propensity to create criminal offences is a cause for concern”. The data show that in 2010-11, the Scottish government created about double of the number of offences made in England that same year: 1,222 compared to 608 south of the border. Mr Mitchell states: “Passing more laws than the judiciary can make proper use of its a very Rechtsstaat-ish approach to government. The principle is that, since the people cannot safely be left to their own devices, there should be a law for everything.”

Mr Mitchell told Scottish Legal News: “Hyper-moralism is, as I see it, a form of moralism which goes beyond the conventional boredom and backwardness of a society of Pharisees that is constantly observing each other’s behaviour in the hope controlling it, or making people feel like outsiders if they do not.”

He added: “The essence of the rule of law is reciprocity between the rulers and the ruled. Luckily we still have the means to resist the political-administrative elite and its incipient, post-Stalinist totalitarianism. What we need is the will. A start could be made by drafting a new Claim of (Civic) Right.”