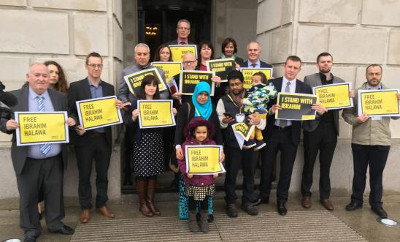 Members of the Northern Ireland Assembly have called for the release of 20-year-old Irish citizen Ibrahim Halawa from detention in Egypt at a demonstration on the steps of Stormont.

Mr Halawa is being prosecuted alongside hundreds of co-defendants in mass trial for allegedly participating in a political protest. Amnesty has declared him a Prisoner of Conscience.

He was 17 at the time of his arrest in 2013 and has been charged with serious offences, all of which he strongly denies. His lawyers believe that, if convicted, he may face the death penalty.

Patrick Corrigan, Northern Ireland programme director of Amnesty International, said: “We welcome the support of members of the Northern Ireland Assembly for Mr Halawa’s immediate release and urge the Irish Government to continue their work on his behalf and to use every means at their disposal to secure his release.”

“This young Irish citizen has spent more than three years living in horrific conditions, without access to proper medical care, and without any prospect of a fair trial.

“Amnesty International remains gravely concerned for his physical and mental wellbeing and we reiterate our call for his immediate and unconditional release.”